Voted “the world’s most unspoilt destination” in 2004 by the National Geographic Traveller Magazine, Norway remains one of the great natural wonders of the world. Norway is a land of sublime natural beauty. Along its long, lonely coast – still the true heart of the country – waterfalls plunge into pristine fjords fringed by primeval forests. Majestic peaks crowned with glaciers rise sheer out of the sea. The air is so fresh you can taste it, and from the Midnight Sun to the polar night, the refraction of light on the countless islands add its own veil of mystery. Endless days, endless night. Each season casts its own spell. Between the extremes of Midnight Sun and Polar Night, and between the temperature south and the Arctic north, natural light always plays an important role, dramatizing the scenery and enhancing the experience. Whenever you choose to travel, your visit will be unique.

Norway is one of the very few countries in the world that actually has four seasons. This does not, however, put any kind of restriction on outdoor activities, you can, for instance, go skiing, diving, fishing, climbing, glacier walking, rafting or reindeer sledding. In Norway, they have a saying: “There is no such thing as bad weather, only bad clothing!” Compared to most other places at a similar latitude Norway has a very mild climate thanks to the warming effects of the Gulf Stream flowing along its coast. The summer temperature in Norway varies from 5’C to 35’C, so you should be prepared for everything. The average temperature in Oslo in July is 17.3’C, and an average June day in Oslo has almost 19 hours of daylight.

Norwegian and English is widely spoken.

* Purchase price will vary depending on point of sale.

Below are a few hints that may help you when planning for your trip to Norway:

For South African passport holders, a visa is required to enter Norway. This visa must be obtained prior to departure from South Africa.

The climate is Arctic, meaning that the winters are long, cold, dark and everything is covered in snow, and that the summers are temperate. Winter starts in October and lasts through to April. Summer is from May to September. Expect warm summer temperatures of 25 degrees whilst winters can be up to –37 in certain places, but –10 to –20 is more “common”. Most of the precipitation falls is winter in the form of snow. Oslo’s average winter temperatures are between –2 and –10.

Norwegian summers are similar to Durban winters. The days are pleasant but if the wind blows, it can be a bit chilly. The evenings are generally pleasant but please do take a warm jersey and windbreaker even during the summer months. During winter, warm clothing is essential. A typical winter wardrobe will consist of thermal under-vest and long johns, a t-shirt, a thick warm jersey, jeans, jacket, scarf, gloves and hiking boots. It is common practice that when entering a sleeping establishment to leave your “outside shoes” at the door and don a pair of sneakers or the like for inside. Walking around in socks is also widely accepted. This applies more in winter than in summer.

The unit of currency is the Norwegian Kroner (NOK or Kr). 1 kroner is made of 100 ore (cents equivalent). The bills will come in denominations of 50, 100, 200, 500 and 1000. The coins are 20, 10, 5, 1 and a 50 øre.Exchange facilities are found at the airports, banks, hotels, as well as the Oslo S that is the central train station. Banks are open Monday to Wednesday from 08.15 to 15.30 and Thursday and Friday from 08.15 to 18.00. Credit Cards are widely accepted, but it is always worth asking, before doing a transaction. Try at all times to have about Kr 500.00 with you, as this will get you out of most emergency situations. For example, grocery stores do not accept Diners or American Express cards, so please ask first.

Shops are generally open until late (20.00/21.00) but on Saturdays until 17.00. The cost of living is high in Norway and is therefore little or no bargain shopping. Things to buy as souvenirs include hand knitted and machine made sweaters with typical Norwegian designs. Norway is also famous for pewter-ware and silver jewellery.

Norwegians eat a lot of seafood, considering that only 11% of the land is arable. Fresh Norwegian Salmon at the grocery store retails for approx Kr 65.00 per kilo, but why buy it at the shops, if you can buy it off the back of the fishing boats along the harbour. This is generally the practice in the smaller coastal villages and only in summer. A “typical” meal will be boiled or grilled salmon, potatoes, and salad. Meat (beef) is expensive for the amount you get. Check the price before you order; a 300g steak with veggies will cost you Kr 300.00, a cup of coffee at the end of the meal, will be another Kr 20.00. Dining out in Norway is generally expensive.

Most hotels and restaurants serve alcohol, but only between 15.00 and 22.00. Alcohol is extremely expensive. Beers and wines are cheaper in grocery stores than in restaurants. Tap water is safe to drink.

Travel light. If you are hopping on and off trains and busses, there is nothing worse than having lots of luggage. 1 medium size suitcase and a hand luggage should be enough per person.

Taxis are numerous in cities though expensive and all taxi drivers speak English. Make sure the meter is on and you can pay by Credit card in the taxis. Busses and trains are plentiful, reliable and are cheaper means of transport. They leave at exactly the stated time, and will not wait. Due to Norway’s terrain, the train network is somewhat limited, but there are busses serving areas where is no train.

Tipping is not the norm in Norway as it is in South Africa. Generally a service charge is included in the bill, but a tip up to 10% is always welcome and will be appreciated.

We recommend that you bring some kind of washing soap to do your hand washing. It is also a good idea to bring a blow up hanger, as not all hotel hangers can be removed from the cupboards. Take toiletries from home, and try avoiding buying the un-necessary there.

We advise you to stock up on film before you leave South Africa, and have your spools developed when you return.

Norway has the same voltage as South Africa. (220V). Almost all plugs, are two-prong plugs. If you have a plug that has a South African 3 prong, change it before you leave, or take an adapter.

South Africans need an international Driving license that is available from the AA. This is valid for 12 months. Make sure you also have your South African drivers license with you.

PLEASE DO NOT BREAK ANY ROAD RULES IN NORWAY, YOU WILL BE VERY SORRY.

For Example, jumping a red light, will cost you Kr 4800.00. Breaking the speed limit by 6 kilometres will attract a minimum of Kr 5000.00, and driving under the influence of alcohol will land you in prison. Please be careful.

Please remember that it is imperative to re-confirm your flight at least 72 hours prior to departure. Failure to do so can at times result in the automatic cancellation of your flight. This is your own responsibility. 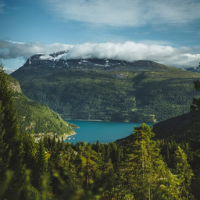 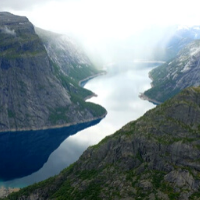 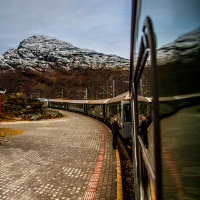 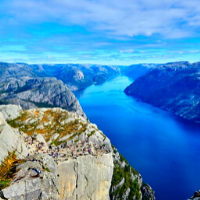 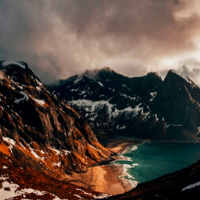 Splendour of Norway – The Voyage North 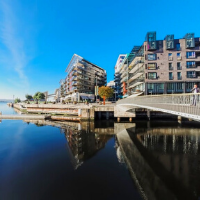 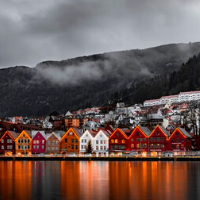 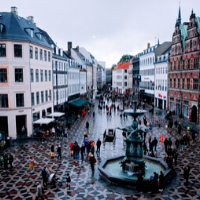