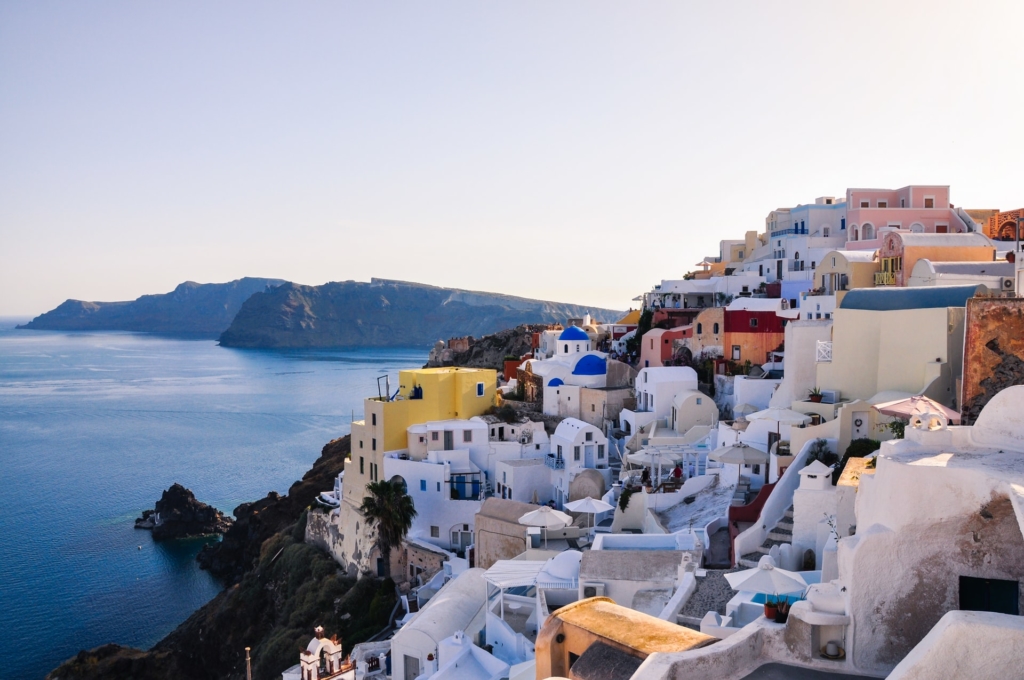 Day 1:  MYKONOS
On arrival at Mykonos airport, you will be met and transferred to your hotel. Mykonos is Greece’s most famous island and a whitewashed paradise in the heart of the Cyclades.
Overnight:  Mykonos

Day 2:  MYKONOS
After breakfast you will be transferred to the port for your organized tour to Delos. Sail to the small island of Delos on a caique (a small Mediterranean sailing boat). The island may be small but it is home to numerous impressive monuments and is heralded as the birthplace of the Greek gods Apollo and Artemis. Due to its religious significance, a decision was made to purify the island and all remains of the dead were removed from it. It was also decided that from then on no one should be born or die on the island so that no one tried to claim it as an inheritance. As a result of this, the island had no indigenous community and ended up uninhabited, unlike the other important Cycladic islands. Return from your excursion to Delos back to the hotel on Mykonos.
Overnight:  Mykonos  (B)

Day 3:  MYKONOS
In case it had not yet been apparent on the previous day Mykonos is truly as beautiful as it appears on the postcards. Although one of the smallest islands of the Cyclades complex, Mykonos is definitely the most famous, thanks to its treasures of natural beauty, rich history, cosmopolitan character combined with a wild nightlife, as well as plenty of local colour. Today is at leisure to explore all the history and natural beauty that Mykonos has to offer.
Overnight:  Mykonos  (B)

Day 4:  MYKONOS – SANTORINI
You will be collected at your hotel and transferred to the port, for the hydrofoil trip to Santorini. On arrival on Santorini, the island known for its world-famous sunsets and breathtaking volcanic scenery, you will be transferred to your hotel.
Overnight: Santorini  (B)

Day 5:  SANTORINI
Today you will be going on a full day organized tour that will visit the Volcano, some hot springs, Thirassia, ending with a view of the sunset on Oia. After being picked up from one of the designated pick-up points (information to be provided the night before) and being transferred to Athinios port you will start this tour sailing on a traditional caique (Mediterranean sailing boat). The first stop is on the islet of Nea Kameni which is the Volcano of Santorini itself. You will have an opportunity to climb to the top of the crater of this active but currently dormant Volcano (entrance fee not included). Next sail to Palea Kameni, home to some natural hot springs formed by the numerous volcanic eruptions in the area over the centuries. A short stop will be made allowing for an opportunity to go for a swim in the warm yellow-green waters which are claimed to have healing properties. Then dock at Thirassia, the second largest island of the Caldera opposite Santorini but much quieter and unaffected by the large number of tourists. Continue to Ammoudi from where stairs lead up to Oia village (transport by donkey possible). Explore the traditional settlement of Oia with its unique blend of large Venetian houses and small cave homes before ending the tour viewing the famous sunset. Thereafter you will return to the hotel.
Overnight:  Santorini  (B)

Day 6:  SANTORINI
This day will be entirely at your leisure to explore Santorini. Cousteau looked for the lost city of Atlantis on Santorini. The present-day shape of the island is a consequence of the activity of the volcano in prehistoric times feeding the myth of the lost Atlantis. Santorini is essentially what remains of an enormous volcanic explosion dating back 3,600 years and which created the current geological caldera and some of the surrounding islands. Crescent-shaped Santorini (or Thíra), the precious gem of the Aegean, is actually a group of islands consisting of Thíra, Thirassiá, Asproníssi, Palea and Nea Kaméni in the southernmost part of Cyclades. There is much left to see. One could walk the busy streets of Fira, Santorini’s capital, or visit Pyrgos offering the best panoramic view of the island. Or discover what any of the numerous smaller settlements still has to offer as you wander their narrow cobblestone streets and admire the little white chapels, the cave white houses and the blue windows which have come to act as romantic symbols of the island.
Overnight: Santorini  (B)

Day 7:  SANTORINI
You will be collected at your hotel and transferred to the port (or airport).  (B) 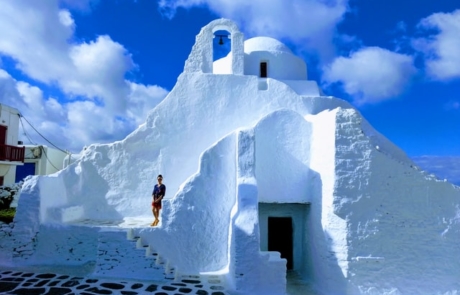 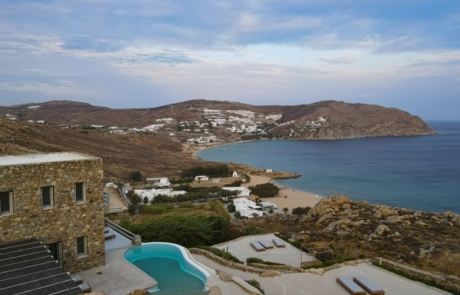 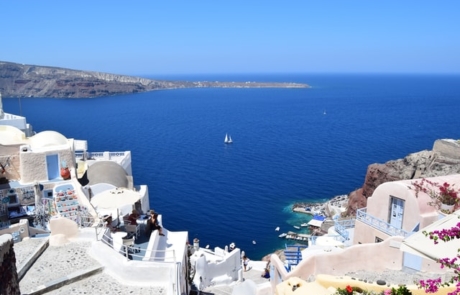 Note:  Rate applies to arrival date and will not be calculated pro rata over the stay.